Sexual assault is a traumatic experience and can have various effects on a person, including one’s memory. This effect can vary from person to person and situation to situation, but there are some responses to trauma that which survivors often encounter.

When a person experiences trauma such as sexual assault, their body will immediately respond in one of three ways, fight, flight, or freeze. This means that a person will try to fight the assailant, try to run away from the assailant, or they will not move. All of these responses are natural and are the three most common reactions to trauma.

The fight response is considered an “I can” response as a person will move towards the assailant. This reaction is related to emotions such as rage, anger, irritation, and frustration.

The freeze response, unlike fight or flight, is considered an “I can’t” response, and occurs when the body is overwhelmed, and becomes unable to move. This reaction is related to emotions such as numbness, depression, and helplessness.

Along with the fight, flight, and freeze responses commonly associated with trauma, there is also a more recently discovered response known as the fawn response. This response occurs when a person experiencing trauma attempts to avoid conflict by appeasing others (The Dawn, 2021). This can be seen in adults when a person in a relationship consistently ignores their own needs and conforming to what others expect of them (The Dawn, 2021).

Some characteristics of this response include apologizing for everything, being unable to express one’s feelings, ending a chat threat overly enthusiastically, valuing other’s needs more, and flattering others (Neo, P., 2020).

Despite a person repeatedly hurting them, a person experiencing the fawn response will show empathy towards the perpetrator and see the situation from their perspective forgiving them easily (Neo, P., 2020). This goes beyond seeing a situation from another’s perspective and often leads to a person forgetting their own needs to meet the needs of the perpetrator, and saying yes, when they really mean no (Neo, P., 2020).

Those experiencing the fawn response will also rely on flattery and become very obedient to help protect themselves (Neo, P., 2020). Even if the flattery is empty, or it seems ridiculous, these individuals will use this to help avoid conflict (Neo, P., 2020).

The general immediate reactions to trauma are the fight, flight or freeze responses, but there is a response that occurs in a more specific situations such as rape. This is known as Rape Induced Paralysis, or Tonic Immobility. This type of response can happen to up to 50% of rape victims. This means that in some cases, about half of rape victims experience Tonic Immobility, making this a more common occurrence in rape victims. Part of the reason for this is because this response is the only way the body sees as a way of surviving the assault without escalating the violence or the perpetrator. Tonic Immobility is also more likely to occur in those who have been revictimized.

Tonic Immobility, like the three primary responses, is an uncontrollable response that can cause increased breathing, the inability to speak, and paralysis. When this occurs, it is because the body goes into a severe state of survival mode, much like the freeze response. The uncontrollable freezing of the body, and the inability to move is frightening for victims, and can often be misunderstood. The inability to move, while a safety response, can also seem like the victim is not ‘fighting back’. To others, it seems like the victim wanted it because they did not move, when in reality the victim was paralyzed. (Dr. Rebecca Campbell)

Along with the immediate effects of trauma on the body, there are also long-term effects that can affect a person’s mental state and memory. Post Traumatic Stress Disorder, more commonly known as PTSD occurs after a person experiences a traumatic event. This can affect emotion regulation, it may cause avoidance and numbing, and can cause a person to re-experience the trauma. 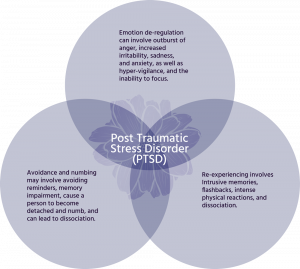 PTSD can occur after one traumatic experience, but what happens when a survivor becomes victimized repeatedly? About 80% of those who were sexually abused as a child will experience a sexual assault after the age of 16 (Tricia Porter, RSW). When revictimization occurs, there is higher chance that Complex PTSD is present.

Complex PTSD can not only effect emotion regulation, cause avoidance, and re-experiencing the trauma, but it can also lead to strained relationships, the changing of world views, impacts on the body and the altering of oneself (Tricia Porter, RSW). 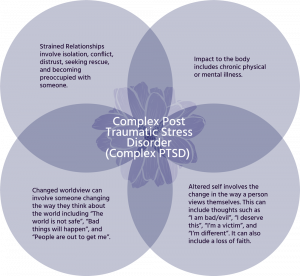 Both PTSD and Complex PTSD occur as a result of trauma, however there are some differences that we can use to help differentiate them.  PTSD can be seen as the crack in the integrity of a vase. This is the result of one event, and can be glued back together, however, when pressure is applied it will break again. On the other hand, Complex PTSD the vase becomes broken into many pieces. This is the result of repeated events, and the core of the vase is also shattered.

The Halton Violence Prevention Council is grateful for the generous donation from the Halton Region Community Investment Fund for without their support this project would not have been possible.